Words too give pain! 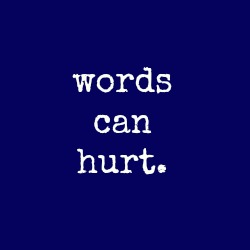 Emotional pain is true, and it is not an illusion. Words are very powerful, and the pain caused by words is as strong as physical pain. Mostly such emotional pain is caused when hurting words come from the closely connected people. However, it is not the only case always.

People always say that it’s just a talk why can’t you leave it, and nobody beat you. Is it an acceptable statement all the time?  It may not be. Emotional pain should be taken seriously as it has impact on your mental and physical health.

Verbal aggression creates long lasting effects. I was in anger, so I talked. It’s not the justification acceptable all the time when emotional pain caused is huge.

Just because it is not visible, it doesn’t mean that there is no emotional pain. Once you talk that can never be reversed, only possibility is concerned person’s willingness to forgive. Most of the cases, forgiving may happen soon but not forgetting. Person sometimes may say hurting words and expect others to consider that as a joke.

Emotional pain influences the physical health. It may be linked with headache, muscle pain and stomachache.

We are humans and we can feel emotional pain and there is nothing wrong if you feel that. When you feel that you are not having control over it, then it needs be worked out. If you don’t pay immediate attention, then emotional pain will be leading us to,

We should learn how to keep ourselves unaffected by such words. Here are the few ways to deal with the same.

It is very difficult to control people around you and what they talk. However, it is up to you to choose your own perspective of life. Forgiving the verbal attacker is not for them, it’s for your better mental health. You are good as you are.