Modern day – Dowry to do or TODO! 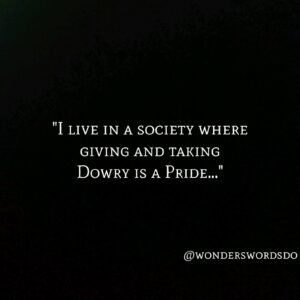 Some of you may feel what is written below is not entirely real. That’s not the case. I personally know all of this happening around me in the friends and family circle.

Still there are families, girls and guys who are taking strong stand against dowry irrespective of their economic status. You all are doing the right thing!

There are some people who say that some advantages are there in dowry system. Their stand is that dowry gives economic support to newly married people, sometimes dowry acts like a provident fund for young people. These are may be good points if the money is given from the extra savings of the other family. What about the family which takes loan just to give dowry? It will be like financial safety for one family at the cost of other family’s debt.

Many families give dowry just to match their social status with the others in their community. People with more wealth may do lavish wedding. That is a different scenario. However, family with low income in the same community as above wealthy person, takes huge money on loan to make equally styled lavish wedding. This loan may burden the next two generations of the family with debt.

Many of us think that education is the way forward for dowry system to stop. However, in many cases if the groom is well educated with high income, then more dowry is expected from a girl in the pretext of secured financial future. If you think that such demands, come only from parents or old people of the family, then that’s not the case always. Many guys who earn more want more luxurious items in marriage to project their social status.

Most worrying part is how love marriages are converted these days. Many experts on the field and activists used to say that love marriages from different economic status people should help stop dowry system. Sadly, that is not the reality. Many families arrange such love marriages like other arranged marriages so that their social status can be shown through marriage which includes projecting the dowry received as well. Girl or guy, whoever has the lower economic background, are made to take money on loan to match the other’s social status during the marriage. Recent trending statement about dowry, ‘we don’t want dowry but you can give whatever you want for your daughter who are we to stop that’. In the end, families make a statement that they are adjusting for children’s love marriage.

When we talk about girl’s education, that doesn’t mean earning a degree. There are parents who educate both their son and daughter in same way. The girl gets same education as brother, gets a good income job from which she doesn’t share any money to parents after marriage. However, some girls feel that dowry is customary in marriage. If a parent has better economic status and they are willing to share the wealth then the girl can go ahead as per legal terms of property sharing with parents and sibling. When the girl asks for amount/gold which is more than their family property, how is it practically possible? If the family, does it for the girl’s happiness, what happens to the future of others in the family? Who holds the responsibility of educating the girl to make strong stand against dowry? Is it parent or society or herself or all together?

There are girls and guys who spend their own earned money on their marriage. This is great. Sometimes, those youngsters apply for loan in lakhs to buy gold for the marriage. The gold will be inside locker but they will be paying interest for the loan. The gold was bought to give as dowry and make up for the societal status. Here whether we should appreciate the youngsters for their self-made financial status or think about new model of dowry?

Many parents (both educated and non-educated) in India try to teach their children about family values which includes accepting dowry as a valid system. What is the use of educating children with higher degrees when they are not able to take a stand against a wrong system like dowry?   Families should also show willingness to legally distribute the properties amongst all in the family irrespective of gender.

There is another thing to be note about this system, which is, if no is being said to dowry, there are people in many communities who doubt the ability of the guy or label the girl as arrogant if she has a job.

We all co-exist in the same society as above!