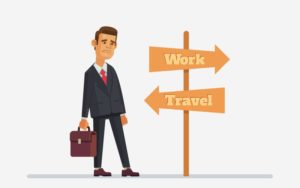 Travelling long hours to reach office in the prevailing horrible traffic is a deal breaker for all people. Be it a personal vehicle or public transportation, the traffic nightmares are same for all.  Need for open space, lesser cost of infrastructure and maintenance forces companies to move to city outskirts. However, proximity to good quality markets, schools and hospitals is a question mark in the outskirts. Because of these, many are forced to stay inside city limits and travel for long hours to work place every single day.

Long commute is not only factor of time. People are facing issues like uncomfortable transportation, bad weather conditions, delay to reach workplace and overcrowding. As per general surveys, women are more satisfied with their job than men. However, this is not the same when women are having longer commute time. The long hours of commute along with increased household and family responsibilities make them tired mentally. Apart from that few woman are facing harassment and bullying when they choose public transport.

Longer commute hours even leads to depression and financial worries. When you are stuck for hours in traffic, it leads to unwanted thinking and even causes you to hate your own self for being in such situation. People tend to get more irritated and drive rashly. Even after reaching the work place, it takes hours to stabilize the mood where there is no time to do so. Research studies say that the more you travel to work place every day, the less you are satisfied with your life.

The commute is a major deciding factor for an employee at work. When a person comes in with a bad mood to work, his whole day will build up on the same until otherwise he realizes what makes him so irritated while entering into office itself. As per the Cambridge university research, people who are traveling more than 60 min for work every day are performing less compared to people who travel less than 30 min.

There are numerous issues people face inside organization due to long hours of commute. As public transport in many places are overcrowded or infrequent during the peak hours, those who use public transportation are more often in a situation of explaining even their 5 min delay to their managers. At times employee may feel why managers do not understand the suffering in the travel. For the organization, it is all about productivity hours. Some organizations have arrangements to give employee hassle-free transport to some extent. Even in those scenarios, employee might have to travel extra hours to avoid public transport. People with personal transport also face same issues due to growing city traffic all-around.

Time scarcity is the other issue in long commute. As most of the time is spent on travel, people do not find enough time for themselves and family. Many even do not find time to cook and start eating snacks or quick fast food for hunger instead of proper meal. Unhealthy eating habits and no physical activity make zombies out of everyone.

It is time to act on the long commute hours.